Viewing on a Smartphone? 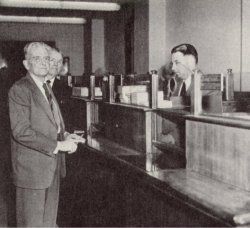 A History of the Bank of Dade

Taken from the HISTORY OF DADE COUNTY, GEORGIA as compiled and written by the Retired Senior Volunteer Program (1981).

An organizational meeting for the purpose of organizing a bank of Trenton and area was held on February 22, 1955 at the courthouse at Trenton. After a lengthy discussion it was decided that a bank was needed and the name should be Bank of Dade. The following were elected to server as the bank’s first directors: George H. Harrison, Douglas E. Morrison, D. T. Brown, Jules C. Case, and R. S. Townsend.

The proposed directors met February 26, 1955 for the purpose of electing officers for the first year. D. T. Brown was elected chairman, George Harrison, president and Col D. E. Morrison, vice-president. Col Morrison indicated that Mrs. Morrison would have a building errected on the public square and the bank would lease quarters in the new building. This was accepted. Application for the charter and deposit was signed and submitted to the proper authorities. In due course of time applications were approved. The bank opened for business on January 12, 1956.

A dedication devotional was held by Rev. Robert Hilton of the Trenton Methodist Church, with directors and employees present, just before the doors opened for business.

The Bank of Dade eventually moved to its current convenient location at the corner of U. S. Highway 11 and Georgia Avenue in the heart of Trenton’s business area where it has enjoyed a steady, consistent growth and is proud to have played a part, and to continue to play an even more important part, in the growth and development of Dade County, and the surrounding area. 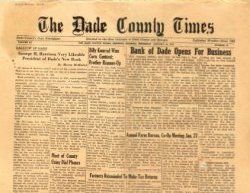 The article that appeared in The Dade County Times on Thursday, January 12, 1956.